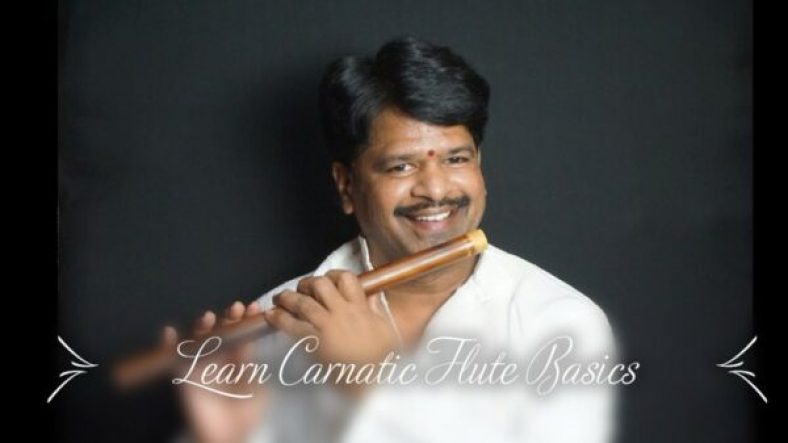 One of the oldest musical instruments of India, the instrument is a key-less transverse flute made of bamboo. The fingers of both hands are used to close and open the holes. It has a blowing hole near one end, and eight closely placed finger holes. The instrument comes in various sizes. The venu is also a highly respected instrument and those who play it are expected to appreciate it, for it is considered a gift to be able to play it.

The flute (Venu) finds great mention in Indian mythology and folklore having been listed as among the 3 original instruments meant for music along with the human sound and Veena (vaani-veena-venu).However it is strange that there is no name mentioned for the typical flute that the Lord plays.

The venu is associated with the Hindu god Krishna, who is often depicted playing it. This kind of flute is mainly used in South India. Lord Vishnu is portrayed as Sri Venugopala.

Venu had not been a part of the Carnatic classical music until the pioneering innovations of Shri Sharaba Shastri and later revisions and updates on his design by Shri T.R. Mahalingam (fondly called Flute Mali). Due to the underlying physics of sound production, flutes have a natural “cut” or a discontinuity when going from the lowest note to the highest note. This discontinuity appears between the notes “ga” and “ma” on a Carnatic flute and between “Ma” and “Pa” for a Hindustani flute (mainly because of the fingering technique differences). In order to adapt the flute to Carnatic Music, certain modifications were necessary such as the addition of the 7th hole, usage of thicker walled bamboos, the technique of lifting the head to change the angle of embouchure when shifting between “ga” and “ma” notes. These innovations enabled artists to perform the Carnatic ragas with all the necessary Gamakas and ornamentations without losing the “Bhaava” of the raga.

I am a professional classical musician. I am a disciple of Late.Nookala Chinna Satyanarayana garu in Carnatic Vocal and learnt Carnatic Flute-Instrumental from late. Manda Balarama Sharma garu and Sri.V.Nagaraju garu. I hold a Diploma in Carnatic Classical Music in both vocal and instrumental.

I have been performing since 1994 as an accompanist and in solo for numerous music and dance festivals, lecture demonstrations, cultural organizations and special occasions like Brahmothsavams in temples within the country.

Since 2001, I have been teaching numerous students through my own music and dance academy “Swara Vaahini” which is registered by the Govt. of Telangana.

I have been encouraging and developing my students to participate in various programs and television music shows like “Paadutha Theeyaga“, Sa Ri Ga Ma Pa Little Champs, etc.

I have been taking online classes through Skype / Google hangouts / Whatsapp for the NRI students from U.S.A., Australia, Denmark, New zealand, Germany, Dubai, Kuwait, Malaysia and Singapore. Most of them are performing in Indian festival occasions regularly.

“Such an amicable and knowledgeable Guru to learn flute. Regularly gives feedbacks on student’s mistakes and corrects them accordingly. He not only taught flute to me, but one of the toughest life lessons- patience, perseverance and dedication. Really feeling blessed to be his student. “

“Very nice classes. You will have a valuable time learning here. Sir is very particular about gamakalu, which is why these classes are of high quality. “

“Krishna Mohan Garu teaching my son from the past 3 years, he is a very excellent instructor, having huge patience and humor and knowledge. I highly recommend him for the best flutist. “

How to Find my Life Purpose – Introductory Course

Free
We will be happy to hear your thoughts

Don’t Miss Any Course Join Our
Most Hot Deals

14 Microsoft Excel Training: From Zero to Hero in 8 Hours Free